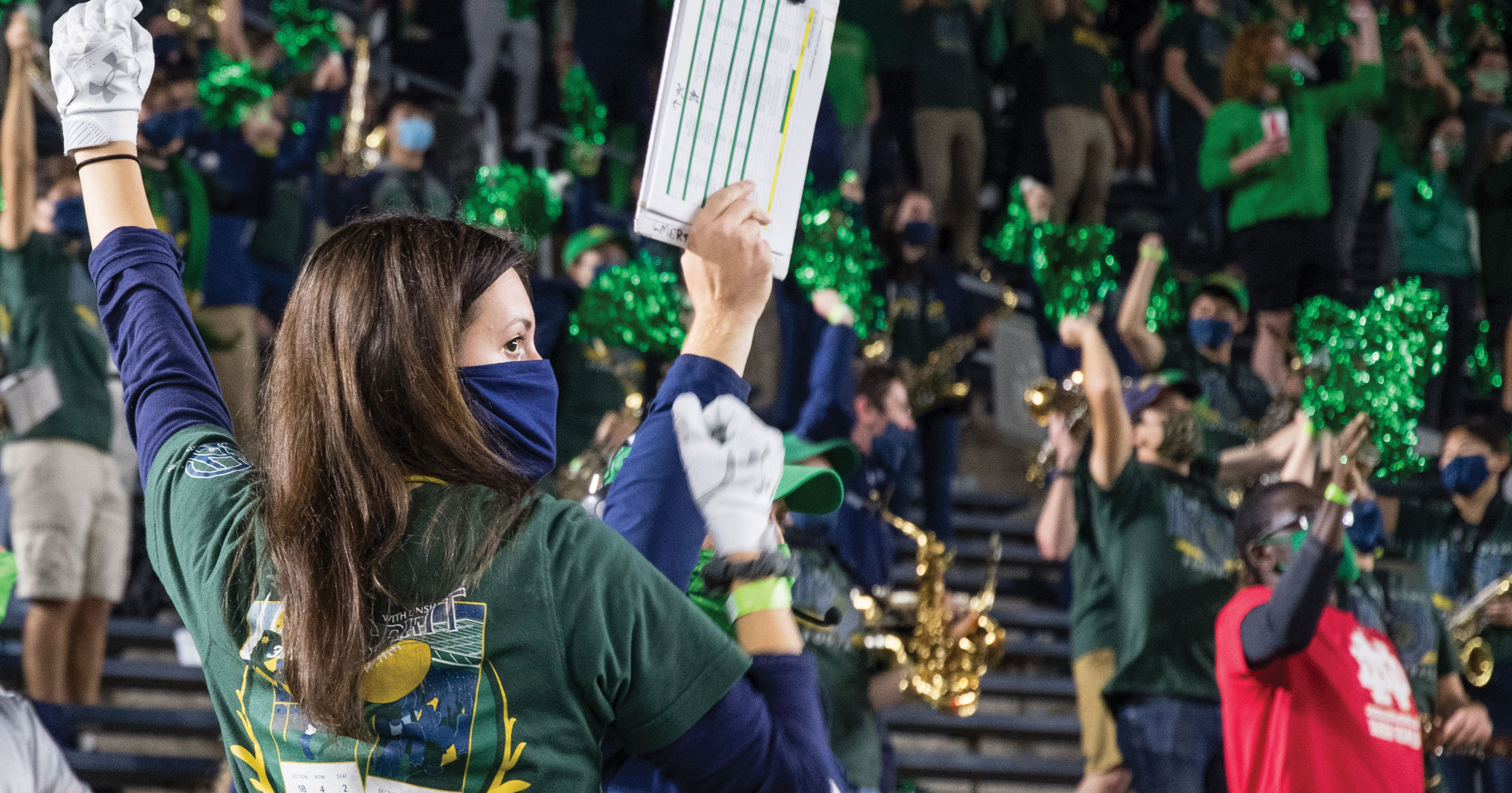 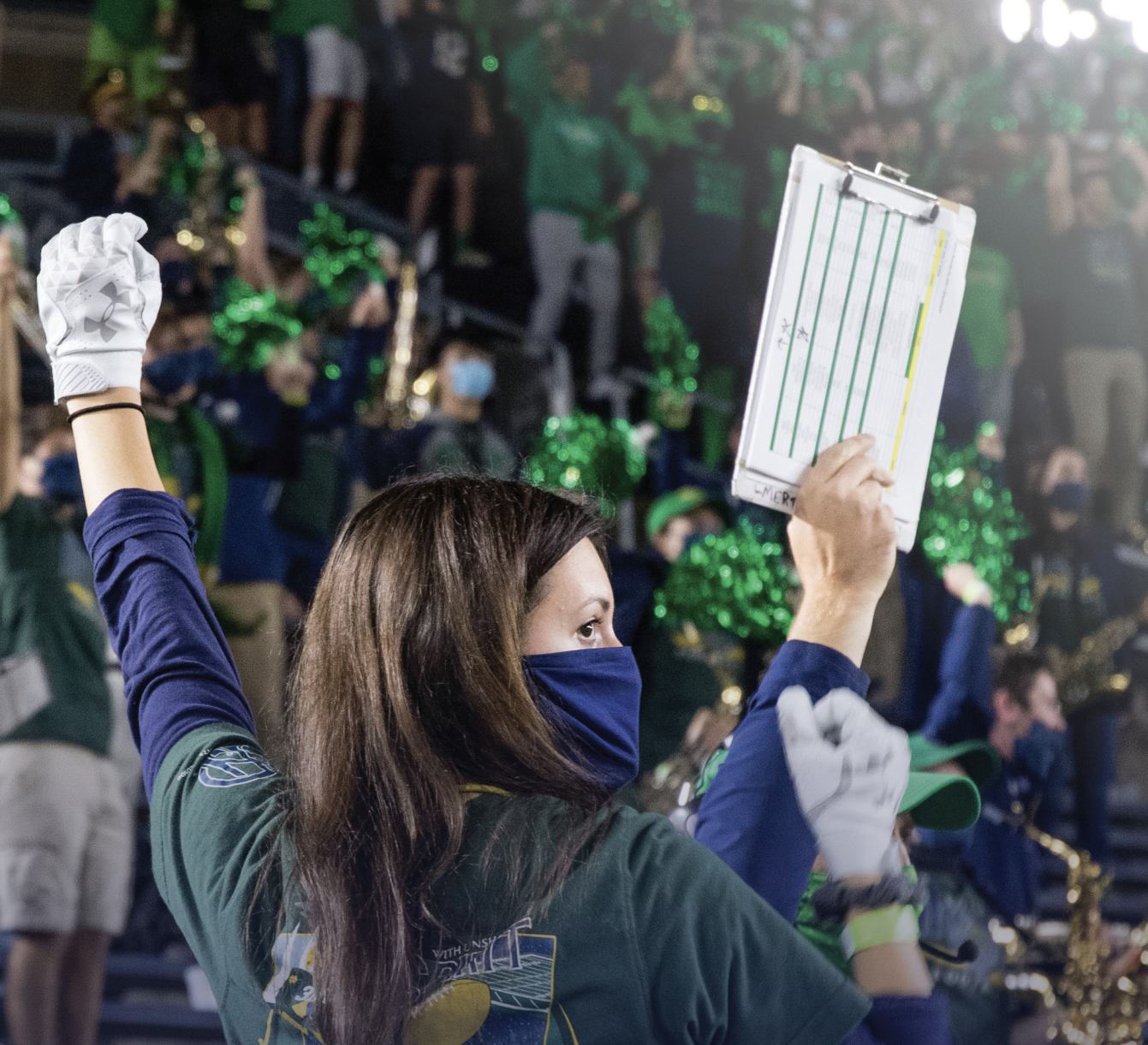 Jon Schipper, MCDS music teacher and director of bands, interviews former student Lily Hallick ’17 about her exciting role and accomplishment at Notre Dame this year. Lily will be graduating this spring from Notre Dame with a bachelor of arts in psychology and Spanish and a minor in data science.

Can you tell us about your background as an MCDS musician?

I attended MCDS from Kindergarten up until I graduated high school in 2017. I originally started off playing the piano and took music theory courses in lower school. Once I got to middle school, I joined the jazz band as a pianist, but switched to the trumpet in sixth grade. From sixth grade up until twelfth grade, I played the trumpet in the jazz band, took IB HL music courses, and had private lessons with Mr. Schipper.

What responsibilities does your job as Head Drum Major entail?

In terms of music, I help conduct every rehearsal and performance that the band gives; I also lead the band in march outs and out of the tunnel during our traditional pregame show. In addition to these responsibilities, I have several other leadership roles, such as leading the CORE Band, a group of upperclassman band members who are in charge of their sections, and carrying out drum major auditions for the next year. I serve as a liaison between the instrument section leaders and the directors to ensure that the season runs smoothly. This involves a lot of organization and administrative work, but working and interacting with the different members and leaders in the band is definitely my favorite part of the job.

What's been the most rewarding part of the job?

While there are many extremely rewarding parts of the job, two of the most rewarding aspects would be having the ability to give back to the band in new ways and being able to experience a lot of personal growth. As drum major, I feel as if I am able to have a major impact on the band students and the overall season. With this, I am not only able to do my job in the sense that I complete certain tasks and participate in the band, but I feel as if I had an active role in the trajectory of the season.

Above all, the 2020-21 season was one for character building not just for the band, but also for myself. It was about personal growth, proving to myself and to others that I am capable of something that I never thought that I would be able to do. Given that the season was historic, not just in terms of the pandemic, but because it was the first year in Notre Dame history that the band was led by three females, I felt an added responsibility to show the world that women can do anything that they put their minds to, and being able to carry that role was truly rewarding in itself.

What is it like conducting 400-plus members of a band?

It is such a surreal and exhilarating experience to be able to conduct the band. In our band, we recognize that conducting is a coveted and special moment, and because of this, we end each rehearsal with a senior conducting a school song of their choice. This is a really unique tradition in our band that every senior looks forward to each season. Given how important and special this is to our band, having the opportunity to be able to conduct the band on a daily basis continually makes me realize and appreciate how lucky and honored I feel to be able to lead this amazing group of people.

What kind of encouragement do you have for young musicians who may look up to you?

Band takes you places! Never in a million years would I think that I would be able to say that I have performed in incredible locations like Yankee Stadium and AT&T Stadium, played with talented musicians like Arturo Sandoval and the band Chicago, or even made my mark on 175 years of Notre Dame tradition. To any young musician, I would say that you are capable of anything that you put your mind to! If it’s been done before, then you can do it too; but if it hasn’t been done before, you can be the first. While taking on these new challenges can be tough and scary, the fear in itself means that the end result is worth it to you. Music is powerful and worthwhile; even if you don’t immediately see the value, it is something that truly stays with you for life. Keep playing your instrument and stick with it; it was one of the best decisions that I ever made, and I have so many people in my life to thank for that, especially Mr. Schipper.

MCDS Celebrates 25 Years! "After 25 years, it is easy to see the strength of MCDS.
Academics